WP1.1 set up the basis for safety measures

One of the key objectives of the ESFR-SMART project is to define new safety measures for the European Sodium Fast Reactor (ESFR) core and system in order to improve the reliability and safety under normal operations; prevent sodium boiling and core degradation in case of accidental situations; mitigate consequences of a low-probability severe accident. During the first year of the project, partners from Work Package 1.1 contributed to improving the existing ESFR design and providing a consistent set of new safety measures which will be assessed later by partners involved in other Work Packages of Subproject 1 Analytical assessment of new safety measures.

Firstly, the ESFR-SMART core description had been established starting from the ESFR-WH core design proposed for the EURATOM CP-ESFR project and from the experience gained in the ESNII+ preparatory phase project . It includes passive safety systems (control rods of Curie Point Electro Magnet type for instance) and corium transfer tubes functioning as a mitigation measure for avoiding a criticality in case of a severe accident.

Secondly, the ESFR system architecture has been proposed relying as far as possible on simplicity and passive systems. As an example, a completely new design of the Decay Heat Removal (DHR) architecture was defined.

Throughout the first year of ESFR-SMART, two important milestones (MS1 and MS2) had been submitted, focusing on the new ESFR reactor architecture and its core design. It is important to highlight that deliverables D1.2 Specification of the new core safety measures and D1.3 Specification of the new system safety measures gather most of the information needed for the ESFR modelling 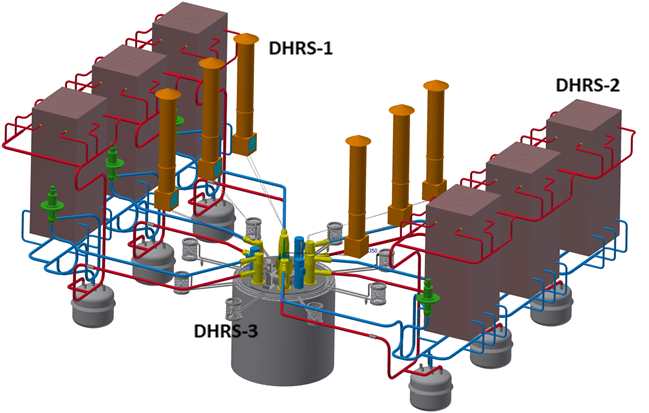 Post written by Enrico Girardi from EDF and ESFR-SMART partner