The PhD of Alexandre Lecoanet was carried out in LEMTA (University of Lorraine/France) and LEAG (CEA/Cadarache/France) within the scope of ESFR-SMART project.

During a severe accident with melting of the core, the corium must be removed from it as soon as possible to reduce recriticality and improve its long-term management. To do so, core discharge tubes have been designed to relocate corium toward a corecatcher where it can be spread. As the corium can be spread out on this device, neutron leaks can be thus increased and corium cooled by surrounding sodium. However, due to corium temperature and composition, significant ablation of the corecatcher can occur. Such phenomena have not yet been deeply studied; so, it is important for core catcher design to better understand the ablation process. Some studies are available but give only results on average ablation velocity of thin plates. The ablation velocity was thus supposed to be constant.

My study aimed at providing data on ablation velocity, cavity shape and their time-evolution. To achieved that, a new experimental facility name HAnSoLO (Hot AblatioN of a SOlid by a Liquid – Observations) was designed and built. Transparent ice was used to simulate the corecatcher material and water to simulate the corium jet. It allowed for real-time visualisation of cavity shape evolution. It is the first time, to the best of our knowledge, that such data are provided. Two main ablation regimes was highlighted: the film regime and the pool-effect one. Many datas were obtained for both regimes and these will help for future corecatcher design and numerical code validation. 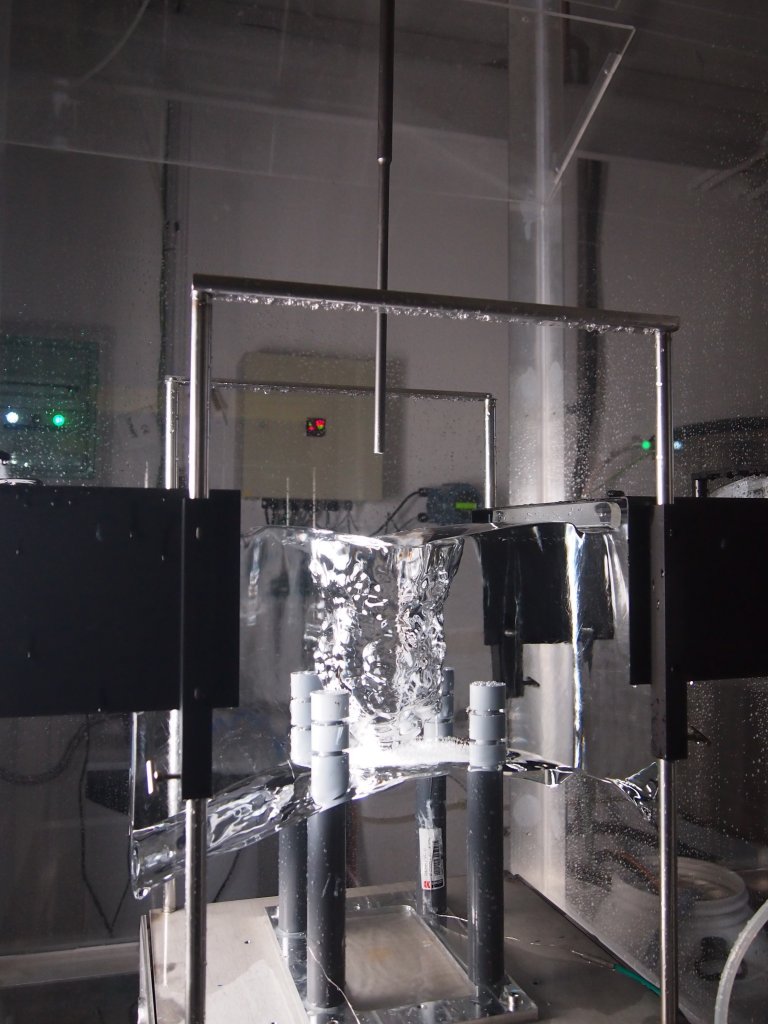 Example of ice bloc after an experimental run.

A conference paper, accepted for the French annual conference of Société Française de Thermique 2019, was selected as one of the best papers for the Biot & Fourier prize. As the congress could not be held, the paper has been published in ENTROPIE journal.